After some days a package arrived at my apartment, the RFF LPC boards are here! Hurrraaay!

So the first step is to solder the tiny 0805 resistors by hand. I have never done that before! So I watched some videos and it looks like I can do it! Some frustrating minutes later I finished with the soldering. Was not that hard but please do not judge my solder joints ;)

I measure every connection with my multimeter and everything seems ok. Nice! Now I go on with soldering the IDC connectors and the ESP8266 on it. Some minutes later. What the heck. My 8266 V3 has wider pins that the footprint in EasyEDA. I already knew that the V3 is wider than the V2. That's why I searched for the V3 in the library. But the footprint was wrong.... But lucky me! I have some V2 lying around too! Some minutes later the board is ready for testing. 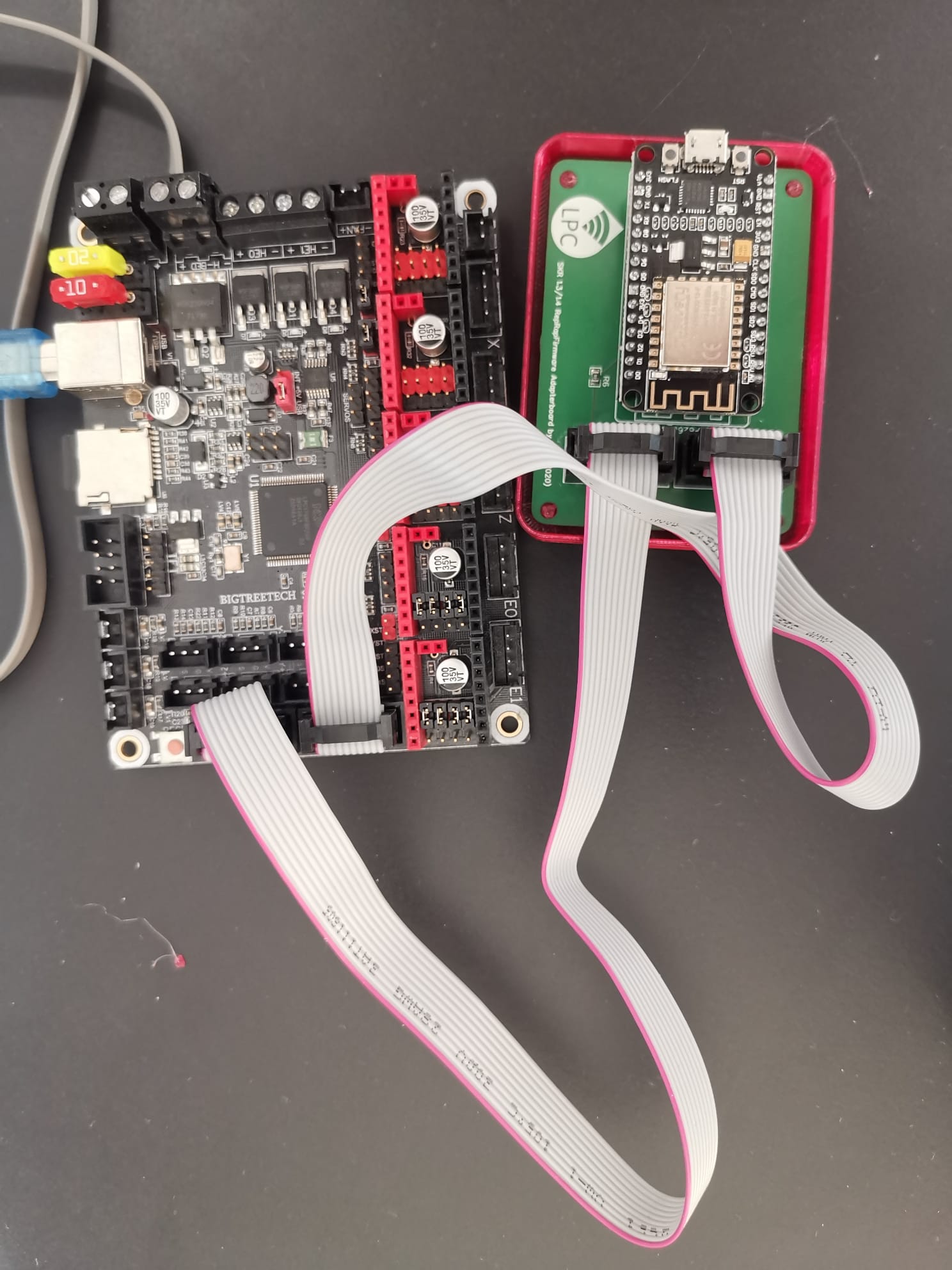 But it did not work. The board keeps resetting itself. After I measured every trace, I saw the mistake. I connected the RESET pin of the ESP to the RESET Pin of the SKR and not to the 1.31 pin... Idiot!

The fix for that was easy! The RESET Pin and the 1.31 are neighbors! So one solder joint and one cut pin later the board works! 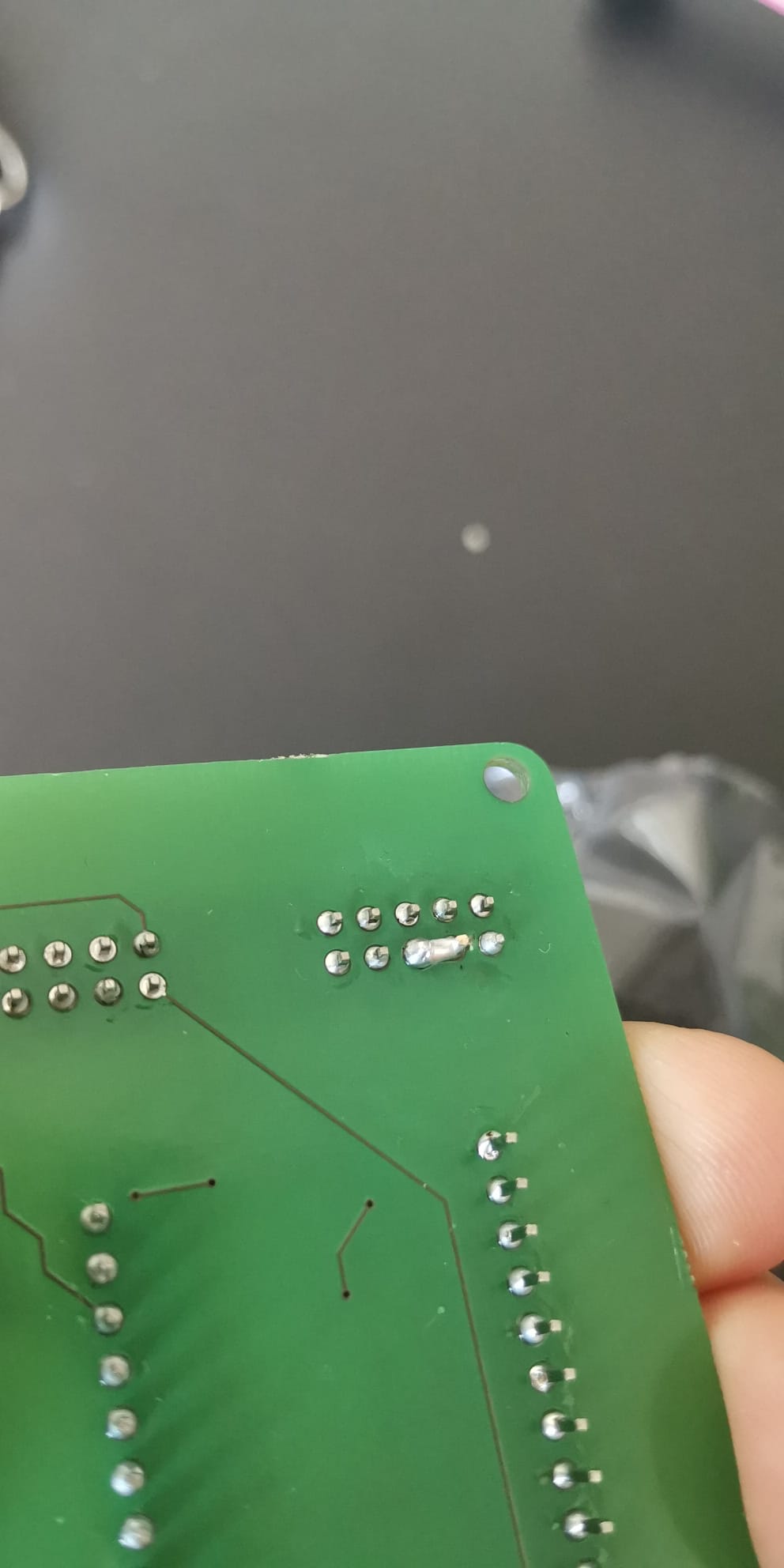 I quickly updated my schematic!

In my last post I talked about the RFF on LPC Project. For making things easier I wanted to make a PCB which I can connect via two 10 pin IDC cables. This are the same which are used for the normal LCDs! For making the PCB I used EasyEDA.

This is a web application which is an all-in-one solution. You can make the schematic, the PCB layout and the BOM list all in one software. Also, the ordering via JLCPCB is integrated. As I am no electronic engineer, I am not super familiar with PCB design. But i can do the basics! So first step was to make the schematic. This is very simple and looks like that:

After that you have to place the components and route the traces! Very easy too! After some work it looks like that:

The next step is to order the PCB on JLCPCB. The process is very simple. If you want to learn more there are a ton of videos on YouTube!

So now I have to wait till the PCBs arrive at my door from China....

Some nights ago i saw an intresting repo on github https://github.com/gloomyandy/RepRapFirmware.

gloomyandy and sdavi are porting the RepRapFirmware (RFF) to LPC176x boards. This means you can run them on a SKR 1.3 etc.

Normally RepRapFirmware is only used on Duet boards (Duet2WIFI,DuetMaestro). In my opinion the RRF is superior to Marlin. Some key points

No more compiling of the firmware. EVERY Setting you can change via a webinterface
The 3D printer is completly controled by the DuetWebControl (DWC) web interface. No need to attach a raspberry with octoprint or another control software. File Upload and everthing is handeld by DWC
Easy firmware update via DWC. Easy backup too.

The cheapest genuine duet board available in Germany cost about 100€. If you are ok with buying a clone* they are available for half the price (50€) on aliexpress. So if you are thinking about going the RFF route i would buy a duet clone directly. The only drawback is that you have to change the connectors on your typical 3D printer (Creality, Anycubic etc,) from JST XH to MOLEX KK. You can use this kit https://www.amazon.de/KF2510-Kit-KF2510-Housing-Adapter-Connector/dp/B01N4O7PP2/ and you need a crimping plier too https://www.amazon.de/Dupont-Crimpwerkzeug-professionellem-Ratschenmechanismus-isoliert/dp/B01A0SAQ3W/.

But if you have a LPC176x board lying around or already running with marlin you can now use RFF too! If your board has a RJ45 port its easy as flashing a firmware.bin. But most of the boards doesn't have one. The SKR boards from Bigtreetech have no network connection at all! It's possible to run RFF without a network connection but i would not recommend it. You will lose a lot of features. So how we add WiFi to the SKR boards? Quite Easy. You only need a ESP8266/ESP-12F/Wemos D1 board/chip and some resistors + cables. The complete guide is here : https://github.com/gloomyandy/RepRapFirmware/wiki/SKR-Wifi.

After some quick solderin my the first prototype of my board was ready. 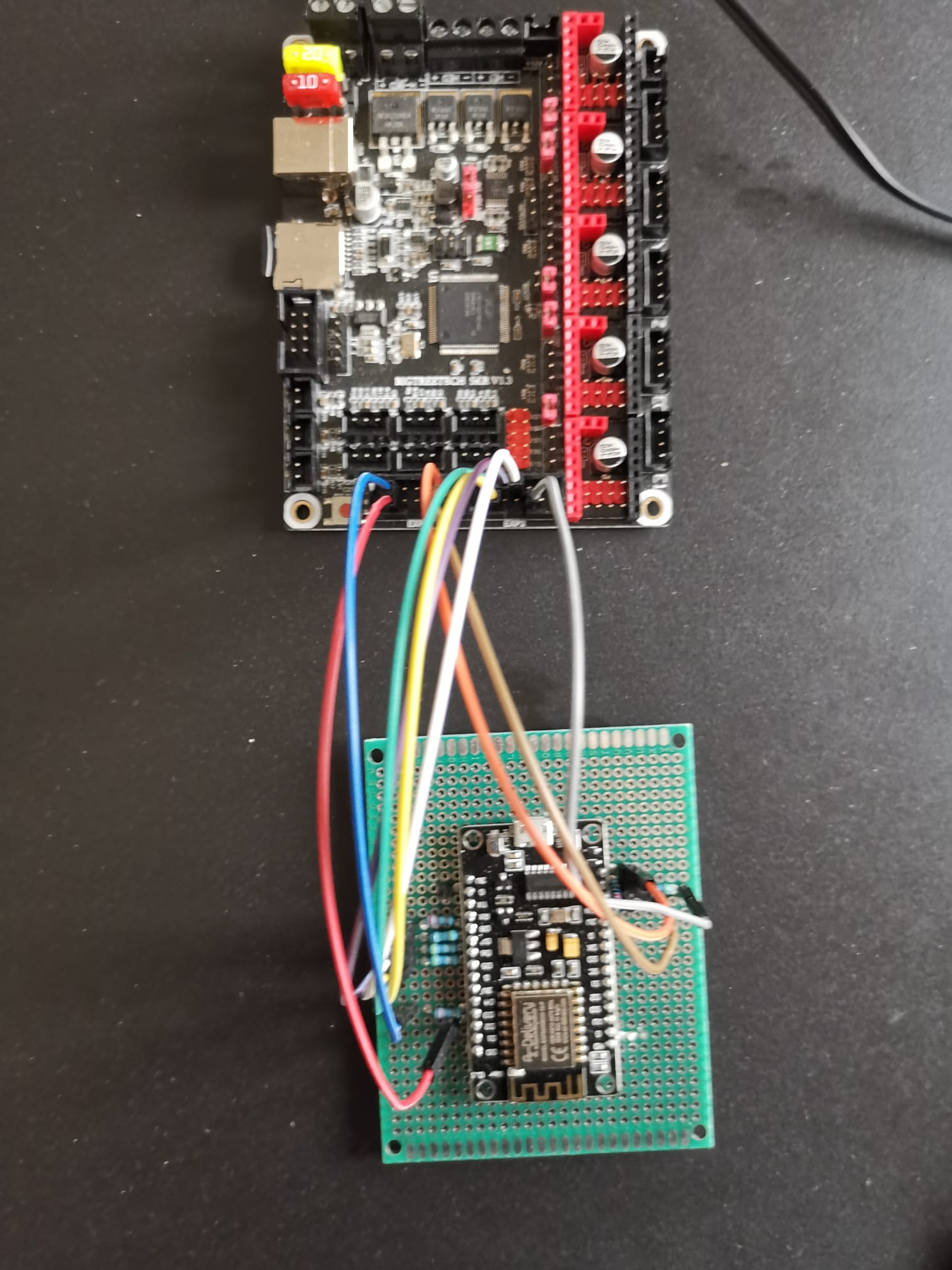 And everthing works flawless! But to make the connecting easier i gonna make my own PCB.